Chambertin is the most famous vineyard in Gevrey-Chambertin, many would argue in the whole of Burgundy, certainly only Romanee-Conti (red) and Montrachet (white) can claim equal standing: That said Chambertin was the favourite wine of Napoleon and Chambertin has been hailed as the King of Burgundy. Chambertin and Clos de Beze are recognised for their rich concentration of fruit flavours, balanced with delicate aromas and ability to age within the bottle. 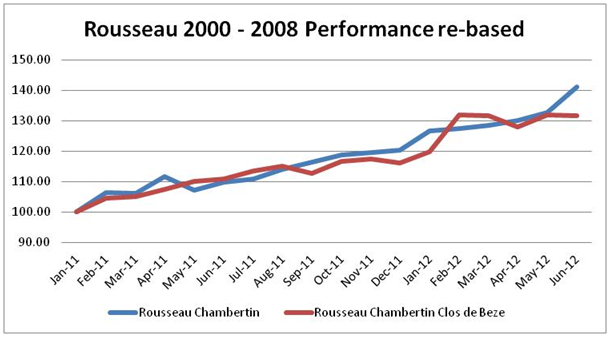 Armand Rousseau is the most prestigious name in Gevrey-Chambertin owning arguably the best plots in Chambertin and Chambertin Clos-de-Beze, as well as Clos de la Roche (1.48 ha), Charmes  (0.92 ha), Clos-st-Jacques (2.21ha), Mazis (0.53ha) Mazoyeres (0.92ha).  The Domaine has developed a style based on elegance and aromatic finesse.

Rousseau is the go to name in Gevrey-Chambertin and competes with Romanée-Conti in terms of total prestige in Burgundy, but at 1/8 of the price. Clos de Beze has an approximate annual production of around 470 cases (almost identical to Romanee Conti) while Chambertin produces between 700-740 cases per year. Supply, therefore is minuscule while Rousseau’s cache continues to grow at pace. Demand is high in traditional markets and emerging markets, while collectors guard their allocations fervently!

For these reasons we have been a strong advocate of buying and holding Rousseau’s top Grand Cru plots and returns have been excellent.