Chateau Margaux 2018 has just released, a wine which uniformly presents the potential of a perfect score from all the major critics. Lisa Perrotti-Brown of The Wine Advocate awards it 97-100 points, positing that is displays ‘long-lingering perfume. Magnificent’. James Suckling follows suit awarding it 99-100 points who proclaims ‘wow. This takes off on the palate the moment you taste it… Superb’. Finally, Jeb Dunnuck awards it 98-100 points calling it ‘one of the wines of the vintage on the Left Bank’. This makes it one of the great wines of 2018 and one extremely likely to be awarded a 100-point score.

The release price today of £5,112 per case of 12 or £2,556 per case of six means that it provides a discount of 2% to the 99 point scoring 2016 which trades at £5,250 and of course a huge 55% discount to the 99 scoring 2015, which should be treated as an outlier. The 99 point scoring 2009 and 2010 trade at £6,350 and £6,600, while the 98+ point scoring 2005 trades at £6,050. The average price of a physical vintage with 98 points or above is £7,170, which becomes £6,063 when we remove the 2015, today’s price offer a 15% discount to this. The average price for the great vintages is indicative of the likely eventual secondary market trading price for the 2018 if it is awarded 99 points. A 100 point score from two or more of the critics, would accelerate this and break the £7,000 mark. As such, we believe today’s release offers an attractive discount to market. Today’s release allows buyers to secure one of the world’s greatest wines at a discount to market. The 2018 is a Chateau Margaux so perfumed, sexy and elegant it could see its first uniformly perfect score in decades. It is extremely exciting and with a large reduction in volumes on release, a wine that will be hard to source, yet a ‘must own’. 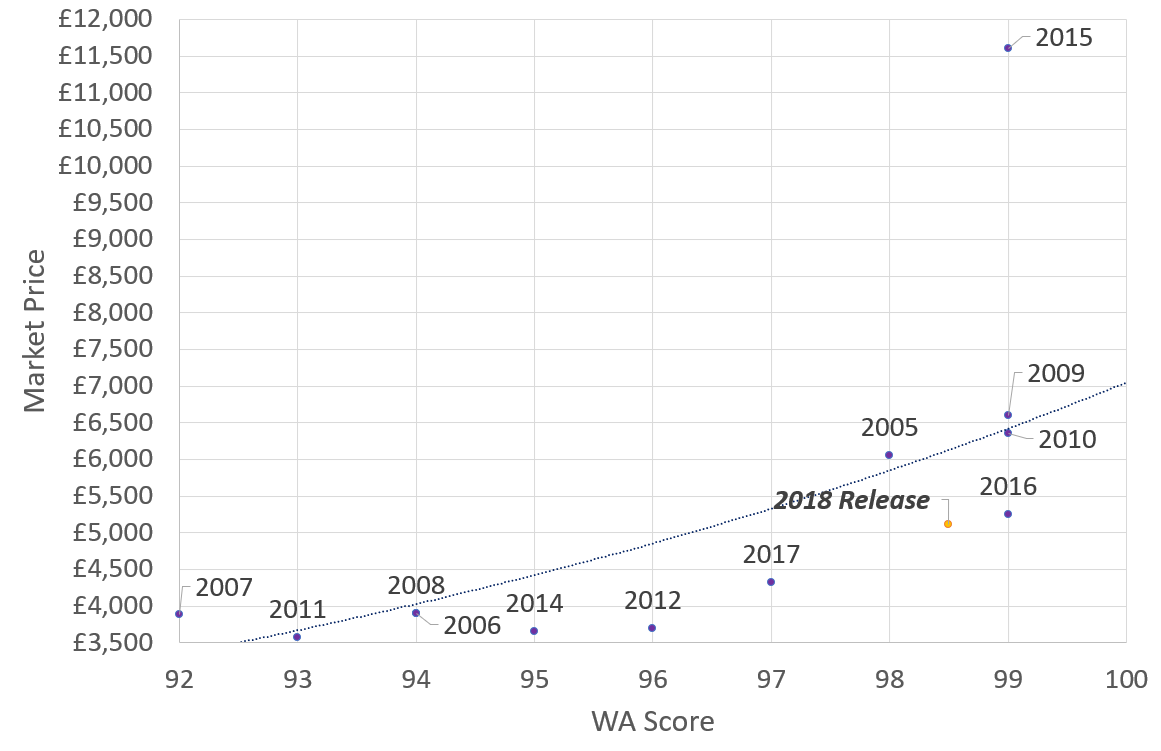 Chateau Margaux is located in the commune of Margaux and unlike many other properties in the Médoc has had very little modernisation. The beautifully elegant structure of the Chateau features on the label and in terms of architecture it has no equal amongst its peers. The wine is often described as feminine with a steely structure, satin texture and perfectly balanced. It was ranked number two behind Lafite in the 1855 classification which has given rise to the saying: if Lafite is the king of clarets Margaux is surely the queen.

Château Margaux has had a long history of making rarely surpassed wines, the 1654 collaboration with the Pontacs family (through marriage) of Haut Brion led directly to the inclusion of Margaux into the group of the First Growths, where it has remained since. The complex elegance and femininity of Margaux has led to a worldwide demand and a price tag that has tripled over the past decade.