The success story of the year has been the exceptional story of the Super Tuscan 2010 vintage. The 2010 Super Tuscan vintage will go down as one of the greatest in history and the established market swallowed their allocations immediately. However, 2010’s critical acclaim means that the international press has been widely reporting this and creating a much larger market than normal. This reflects a general broadening of the fine wine market and a shift toward the top wines of Italy as a consideration for investment as well as for collectors. The Liv-ex Super Tuscan Index has returned 90% over the last five years, vastly outperforming the Liv-ex 50. From the five strongest brands, Masseto has led the pack with 110% growth, while Sassicaia lagged behind its peers returning 7% until August 2009, since then the latter has seen a 40% increase across the last ten vintages.

Super Tuscan wines are sold on a strict allocation basis. Global demand for these leading wines is large, led by America and Europe, leaving very little surplus every year, this year China joined the market with great verve. Moreover, most collectors have bought these wines to drink and there is a huge shortfall on the secondary market, cases of 1985 Sassicaia now trade at above £12,000. The global success of this vintage and the growing demand for the leading Super Tuscans has left little room for new buyers to enter the market the only saving grace has been some European merchants with a slight surplus. Most large merchants have had to go to mainland European stockholders to fulfill demand; this has now been exhausted. 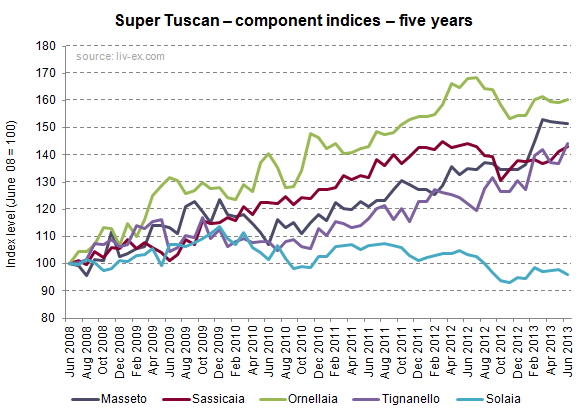 Galloni led the major critics, giving his equal or the highest scores to date for all the leading Super-Tuscan wines,  ‘The wines show beautifully delineated aromatics, punchy fruit and vibrant, mouth-watering acidity, a combination I personally find very appealing, especially at the dinner table.’ Since 2006 Antonio Galloni had been Robert Parker’s critic for Italy; as a result the market now accepts his scores and appraisal as the benchmark. His polemical split this year from the Wine Advocate has resulted in his new company Vinousmedia, where he published his scores for the first time. Galloni’s replacement at the Wine Advocate Monica Larner resoundingly agrees with Galloni publishing scores that reiterate the strength of the vintage.

Notably, the stellar scores mean that Tignanello, Solaia and Ornellaia received their highest ever scores in 2010. Sassicaia’s 96 points means it is the joint third highest ever (the 97 point 2006 trades at £1,900 a case), while Redigaffi received its 3rd highest ever score. Masseto is now one of the most sought after wines the world over, it is released on the place du Bordeaux and merchants have been complaining about receiving derisory allocations. Masseto 2009 released below £800 for a case of 3 bottles last year and this is already trading above £1,250. The 2009 was marked 94+ points by Antonio Galloni of The Wine Advocate. The 98 points awarded to it by Galloni and Larner means it is the second highest scoring Masseto in its history (2006 was awarded 99 points). The 2010, production was 10-15% down on last year and Masseto achieved the highest score of any of the Super Tuscans from the fantastic 2010 vintage.

There is no question that this is a vintage to own for collecting or investing. The wines in this parcel are now very hard to source and represent the very best of Italy in one of their greatest ever vintages. There is a supply shortage already in the market for this vintage and collectors and new market participants will continue buying and consuming it over the next 10 years.